What if Warren Buffet is wrong about reputation? 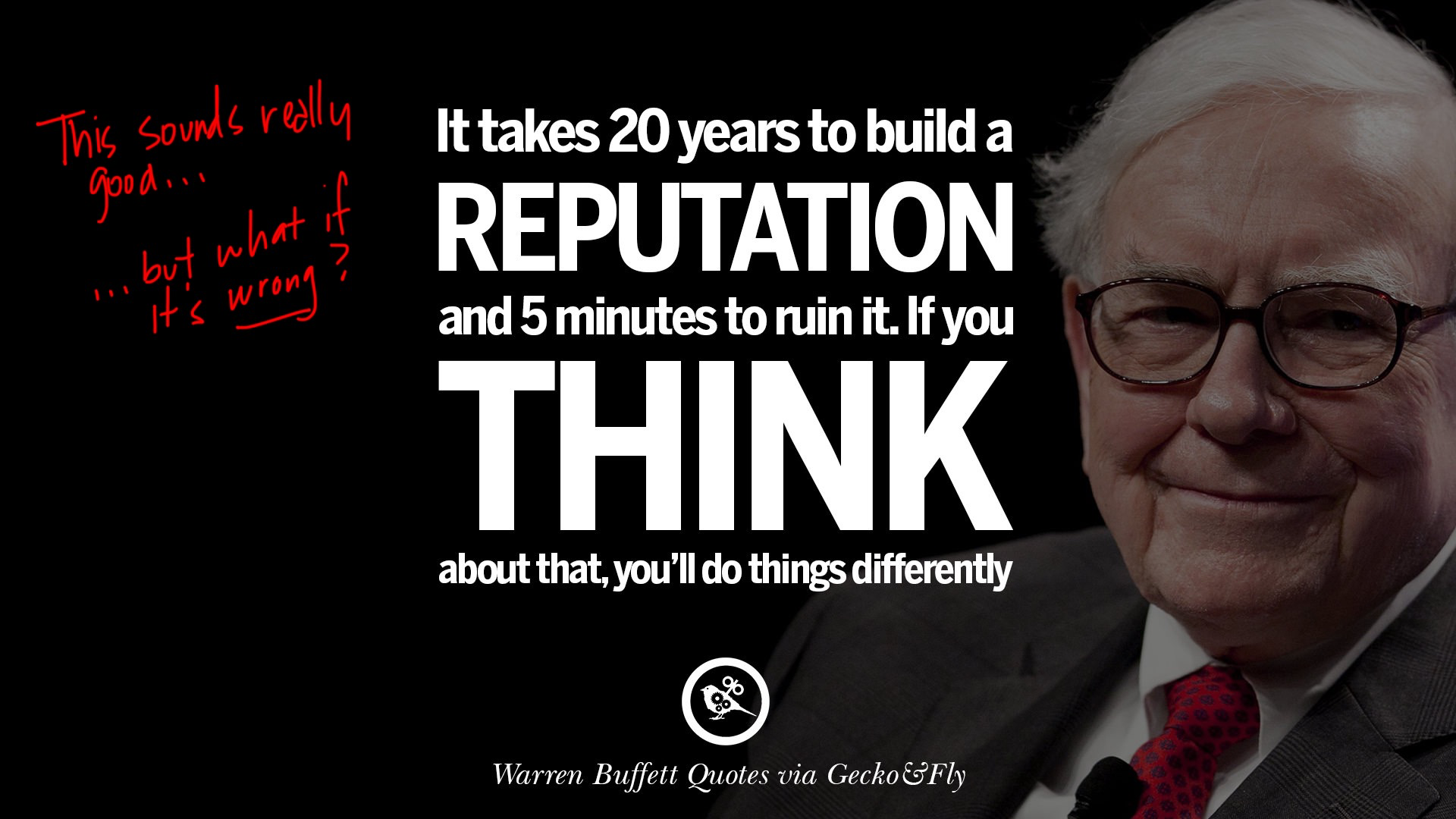 It’s always nice to have the Oracle of Omaha give a ringing endorsement of your profession. Among many things, I consider myself a professional reputation manager. Many of you reading this article share that vocation. We take it on faith and intuition that reputation matters. Good ethics is good business, right? We all know what happened to Enron, don’t we?

People like us have built our careers helping organizations manage and shape their perception in the marketplace, understanding that – while it may be challenging to measure – those actions produce results.

But what if reputation didn’t matter?

What if corporate reputation didn’t connect with any objective measure of performance? Worse, what if it paid to be bad? Let’s set aside the existential questions for a moment (Should you be good for its own sake? Do you believe in a higher power? Do other people have the inalienable right to be treated well?). As a professional reputation manager, I am interested in a more fundamental question:

Can I measure the impact of reputation on corporate performance?

It turns out I can. And as much as it hurts to say, reputation doesn’t seem to make a difference.

I hope you’re bristling right now, wondering how I could make such a stupid and thoughtless claim. Haven’t I spent the last five years writing about Rehumanizing Marketing? Haven’t I railed against abuse of power from Big Data? Wouldn’t I be the last person to suggest that being a good corporate citizen doesn’t matter to bottom-line performance? This doesn’t make sense. Of course, reputation matters.

Part of growing as a professional (and as a person) is being honest with yourself in light of new evidence. And one of the hardest things to do is question the basic assumptions that underpin your worldview.

If you let me, I will ask you to follow along.

Here’s what prompted the discussion – and resulting exploration – that helped me ask myself a difficult question: The Reputation Institute recently released its list of the Top 100 organizations. This year, Netflix topped the list, followed by an impressive list of public and private companies. While you could question the specifics of their scoring process, the Reputation Institute is full of intelligent people. They have a suitable method of ranking something as nebulous as “reputation.”

Despite that tacit endorsement, I usually ignore bullshit rankings like these. (I ignore college rankings for the same reason. They all suck.) But two recent email subject lines caught my eye:

“We live in a reputation economy.”

If you notice carefully, they’re claiming that reputation links to revenue somehow. That’s a concrete claim. That’s testable. So, I tested it.

Does reputation correlate with revenue? No. 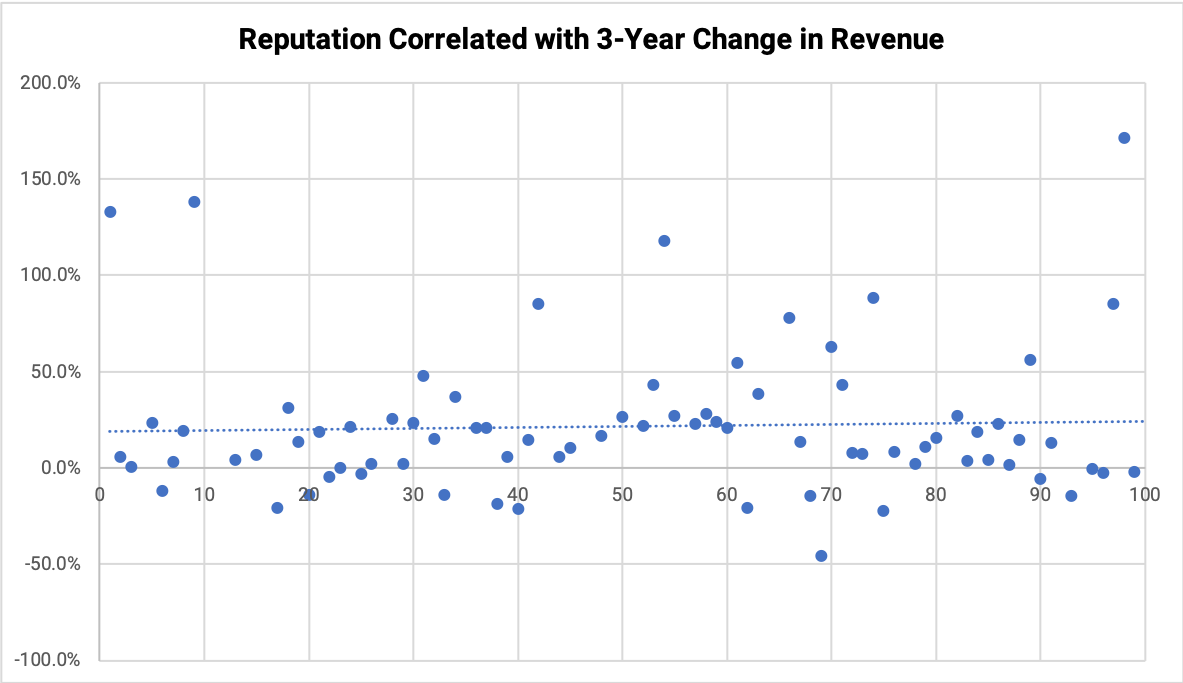 First, a few basics about what you’re looking at. The X-axis represents the Top 100 companies, by reputation rank, in descending order from left (#1) to right (#100). The Y-axis charts the change in revenue over the past three annual reporting periods. The scatter plot is the result. Here’s what you should notice:

If you’re curious, a few of the key statistics are:

If it’s been a while since you took your last statistics class, here’s what they mean:

[Fun fact: If you track one-year revenue instead of three-year revenue, the correlation is much more negative, meaning revenue performance is better the worse your reputation is.]

But it’s not just that the line is flat – the standard deviation tells you how wide the variance is. In other words, you can get wildly different results in revenue performance. It’s telling us that other factors are at play – as well as random chance – in determining those results. The wide variance and non-existent correlation suggest that reputation is not likely among them.

Hey, wait a second. Revenue is a trailing indicator. Reputation is about future performance.

I tend to agree, and that’s why I used three years of prior revenue data, but I see the point. While reputation doesn’t seem to correlate with past revenue, it could correlate with future revenue. Luckily, we have a way to begin to test that: Market Capitalization. In simple terms, market cap is the value of one share of stock multiplied by all shares outstanding (adjusted for weird shit finance people do.) It’s a useful measure because it tracks what the market believes the company’s value will be in the future. There are lots of factors that influence valuation, but we would assume reputation would be among them.

Perhaps reputation accounts for 20% of the variability. Or 10%. Or something we can measure.

Does reputation correlate with market valuation? No. 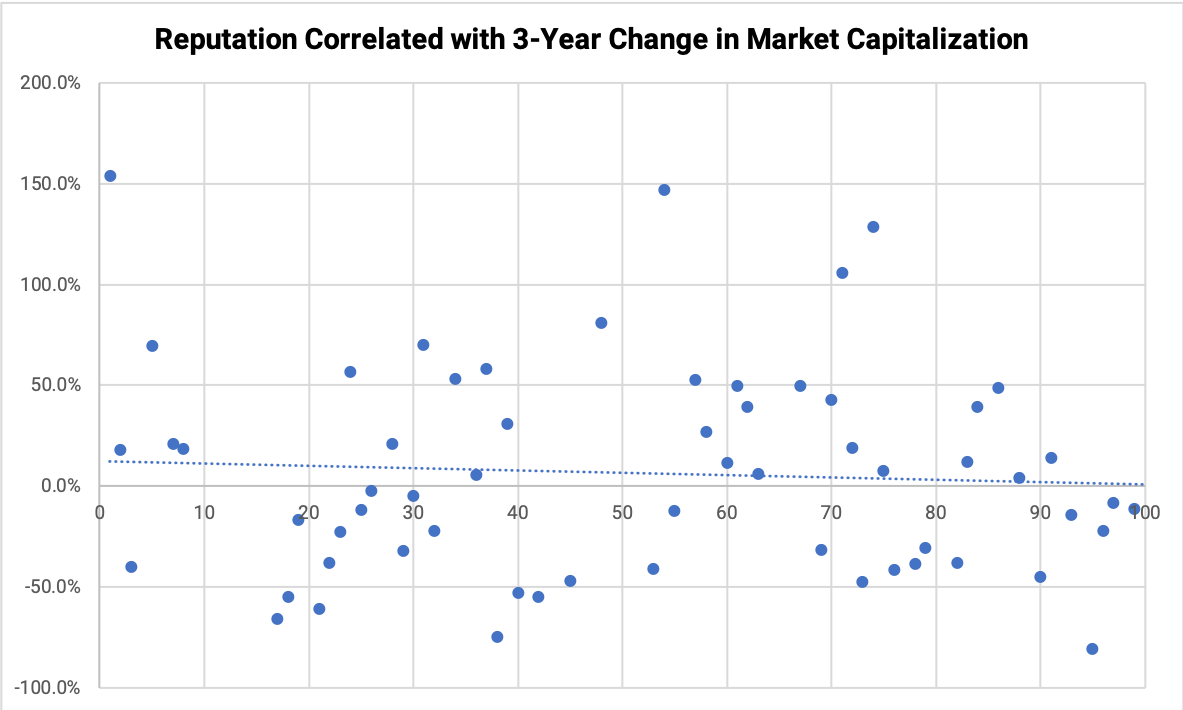 Same chart as before, but this time the dots represent changes in market capitalization over the past three years. And again, the statistics:

Notice anything? It’s a very similar chart. Changes in market capitalization are even more variable than revenue. Moreover, the correlation turns negative if you remove the meteoric value rise in Netflix stock (#1).

Different metric, same conclusion: Reputation does not correlate with future value either.

After looking at two unique ways to correlate reputation with performance, I’m left scratching my head at what I could be missing.

Perhaps the dynamics of smaller companies (or individuals) fundamentally differ from larger, publicly-traded organizations? Maybe, but fractal self-similarity tells us we should expect similar patterns at different scales. (I know, that’s nerdy, but that math works.)

Perhaps reputation matters more to the bottom line than to the top line. In other words, a good reputation might make attracting and retaining the best talent easier, making the company more profitable. Maybe, but profitability is notoriously difficult to compare from one organization to another (see previous note about the weird shit finance and accounting people do). I don’t think we can cherry-pick.

Speaking of cherry-picking, bad reputations could negatively impact individual companies even if it doesn’t matter in general. Maybe, but that’s the foundation of statistical inference. As a manager, if I can’t predict whether a reputation will help or hurt my organization’s performance, I can’t deal with it effectively.

Perhaps reputation helps guide the “social conversation” around your brand, leading to positive feelings and a stronger intent to patronize the organization. Reputation Institute seems to think so. Maybe, but if that were true, it should show up in actual revenue. It doesn’t.

Perhaps “ranking lists” are simply ways to sell consulting services to ego-driven CMOs who want their organization nearer the top of the list. Maybe, but that’s just my inner jaded Gen-Xer showing. I don’t think these lists are designed purely for profiteering, although I’m not naïve enough to think that has no bearing.

Perhaps there is some other metric I’m too stupid to see. Now there’s a better answer. Other scholars have found positive, negative, U-shaped, and no correlations. Here’s my problem with all that: When lots of intelligent people look at the same thing and find wildly different results (and most often, no results), that points to a more straightforward answer:

I think it’s time to bring back those more essential questions:

Should you be good for its own sake?

Do you believe in a higher power?

Do other people have the inalienable right to be treated well?

To measure reputation as you would measure dollars cheapens reputation. It shackles “good in the world” to some temporal and fleeting notion of material gain. That may seem too spiritual for an email from a self-described Honey Badger, but hear me out.

If reputation doesn’t impact corporate performance, that doesn’t mean a good reputation isn’t a worthy goal, but instead that you can do good without fear of how it will impact your business performance. Does Patagonia want to save the planet? Go for it! Does Starbucks wish to have a conversation about race? Let’s have it! Does Nike want to take a stand for athletes? Just do it!

If none of these actions impact corporate performance, it clarifies and purifies their intentions.

Under that assumption, you can know a company believes in something because believing in that thing won’t matter to their revenue or stock prices. They’re doing it because they genuinely want to. (If they only care about their shareholders, that’s obvious too.) You can decide how to align your values (and your purchases) without the confusion around intentions.

[Fun note: My Jewish friends might argue that intentions are subordinate to actions. I see their point. I tend to like the clarity of purpose.]

Some organizations (and some people) may look at these data and conclude that they can break the law with impunity. I like that clarity as well. We cannot rely on “public shaming” or “cancel culture” to adjust our behavior. If they break the law, they need to be prosecuted.

Many of you follow me because of the many threads of writing I’ve pursued over the past five years. Most of them, at their core, are founded on an evolving notion of ethics in the practice of marketing. At that time, I couldn’t help but wonder why corporate leaders would listen to me politely … and then continue acting in ways opposite to that ethical foundation. That includes plenty of organizations you’ve heard of – data privacy breaches and audience exploitation. You name it. They’re all “legal” in the strict sense of the word. In my opinion, they’re unethical.

Why do they keep doing it? I suspect they’ve known for a long time what I just learned: Reputation (and the positive and negative actions and perceptions that create it) don’t make a difference in the only measures they care about.

Disconnecting the idea of Rehumanizing Marketing from a business perspective to an ethical (and personal) perspective allows me to sidestep the issue of revenue performance. Instead of speaking to the corporation or organization (who must, by law, care for its shareholders first and everyone else only to the extent the law requires), I can speak directly to the CMOs themselves. I can appeal to them as people – not in the way their pastor or spiritual guide might, but as a peer. We can use our positions to create change in the world and tell our CEOs that the social media “noise” is just that: noise. As long we produce revenue, we’re free to pursue a bigger mission and ask a very different question:

What could you do in the world if your corporate reputation didn’t impact your company?

I think many CMOs (and even CEOs) would relish that question. It’s liberating and exciting. For those who wouldn’t, I have a different idea. For those who realize reputation doesn’t matter and then decide to push the ethical boundaries, how far can you go before you cross from ethical to legal trouble? How do you break the rules strategically? The market seems to reward ethical rule-breaking as “innovation” and punish legal rule-breaking with fines and restrictions (a la Uber, in both cases.)

Huh. Something to think about.